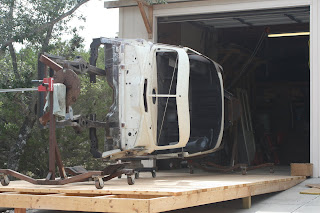 
Well, now she's up on the rotisserie and ready to blast.  I built the temporary deck outside the bay door so I can roll her in and out by myself. 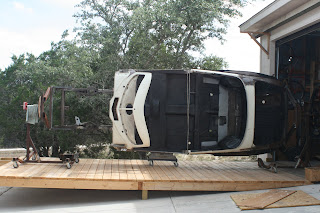 Here's a good shot where you can see all the work that went into the floor pans (click on the pic).  They look black because all the channels underneath the pans during removal, the replacement pans and surrounding frame has been treated with Eastwood's Rust Convertor, followed by their Rust Encapsulator. This was to protect all those areas that the blaster will not be able to reach.

Notice the braces that are temporarily mounted to the B-Posts across the width of the car , along with the braces in the door jambs.  Convertibles are notoriously "movers and shakers", due to the lack of a roof to hold everything in a very rigid structure.  While HUDSONS were notoriously over-built and over-engineered, it never hurts to have a little insurance.  These braces will allow the body to stay exactly where I've welded it back together and will keep it from developing any change, or sagging, etc.

You can also see on the back deck up by the corner of the decklid, areas that were leaded in from the factory.  Also, my new "joint" that mated the remainder of the old deck and the new deck will need to be leaded in.  Blasting comes first, though!  All these areas need to be really clean, for one, and two, blasting will "eat" away lead, faster than metal ('cause it's softer).


And now, I've just about got everybody caught up to our current progress.  If you look back at these posts, they've all been made recently.  We started this blog not very long ago.  The Hudson project actually started in mid-2005.  The bodywork itself on the shell and some of the body sheet-metal has taken me about a year to get this far.  This is in my spare time and all done by myself.  I try to spend about 15-20 hours a week on the car, and most weeks, that works out pretty well.
There's been a considerable amount of work done obtaining parts, having the chrome plating completed, straightening and polishing stainless steel (which there's an incredible # of pieces), and working on the convertible top irons (which has been something of a nightmare).  Soon, I'll get more posted on these other aspects of the restoration.  Also, the engine is due to go to the machine shop in the very near future.
Posted by Russell Chilton at 10:09 AM

Top notch work Russell you will soon be driving that beauty to meets.... Sean