The intake/exhaust assembly is currently mounted on a stand waiting for a finished engine in which to attach it. A point of pride (with me, anyway), is that this Twin-H manifold is an NOS piece.  Never been mounted on a car, but, rather collecting dust on a shelf for the last 58 years.

The manifolds were blasted and thoroughly cleaned, freeze plugs replaced, etch-primered and high-temp painted the correct original colors, with a little fudging.  Originally the intake was gold, but the exact color is a bit vague.  Oldsmobile gold was used and is actually very close to the original color.  The fuel filter was found on-line and makes a nice addition.  Some of the fuel lines still need to be fabricated, and the choke tubes need to be tweaked.

The carburetors are correct Carter 968S which was found on the 308's, correct for the Hornets of the time.

The heat shields were originally steel and painted, but I decided aluminum plates might make a better heat sink.  They were then polished, but I intentionally left some machining marks and scratches in them, so as to appear vintage.  I think it's a nice touch.  Likewise, a few select dents were left in the breather pipe facing the viewer, for the same purpose. 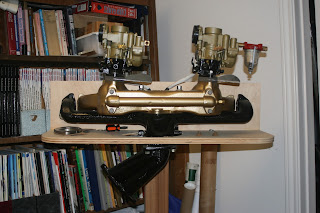 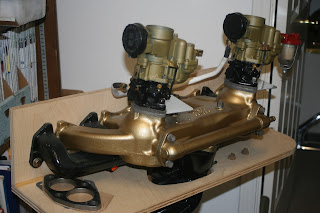 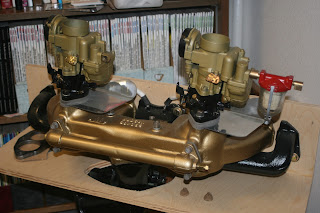 If you look closely in the first pic, mounted to the bottom of the exhaust manifold is a "splitter" which splits the exhaust into two pipes for the purpose of dual exhaust.  This is an aftermarket piece cast by a fellow Hudson Club Member many years ago, which I've held onto.   Not real sure if it will make it to the car or not at this point.  Clifford Perforance has recently completed another run of headers, which would breathe much better than the manifold.  I'm considering switching to those.
Posted by Russell Chilton at 4:11 PM