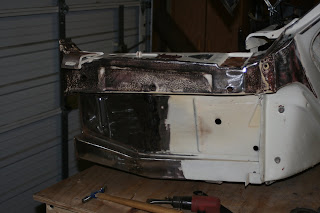 The "new" cowl was in pretty good shape, but the bottom 1/3 on both sides needed some new pieces installed, which were obtained from the original cowl.

Additionally, the channel underneath the vent defrosters at the back of the dashboard needed some new pieces fabricated. 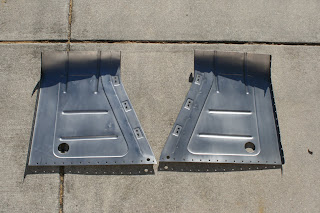 I had new front floor pans custom made by a metal-man friend of mine in CA.  He'll work with me when I tell him I want only 19-gauge metal (which is not really any longer made), and exact duplicates of the original pattern that HUDSON used.  The only "concession" I made was to have the "L" on the sides bend up, rather than down, as was originally employed.  This was only to make installation easier.  At this point, the car is not yet up on the rotisserie, and I wanted the car structurally sound before rotating it on it's side.  These pans turned out exceptional. 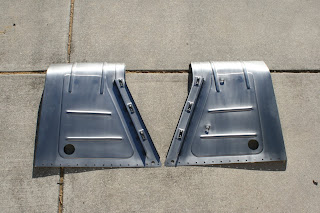 This is actually the bottom half of the front floor pan. The top edge of these pans gets butt-welded to the upper half of the existing pans, which bend up into the  firewall. 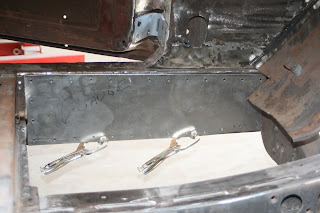 Here's a later shot with the cowl mounted on the frame and repairs done.  Step-down convertibles  typically develop weak points on the frame directly underneath the cowl.  I took this opportunity for another deviation from stock.  On the inside of the frame member, a piece of 16-gauge metal was welded in for some added strength.  When I was inspecting the frame, no signs of weakness were discovered, but it never hurts to safer, rather than sorry.  Notice the upper half of the floor pan (which was removed to make repairs is now back in the car and left long, so that a good scribe line can be made with the new pans and the two can be mated together.

The hinges are NOS I was lucky enough to locate.  Extremely rare, they are convertible-specific and thicker than a closed-car hinge.  Additionally, the doors have been mounted here. The doors were aligned, not just with the cowl, but with the back deck and gaps between doors and body were adjusted to within a few thousandths.  This also gave us the "precise" location of the cowl before it was welded in place. 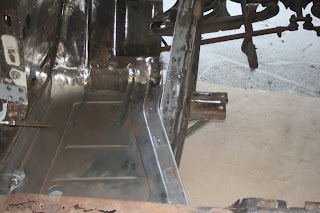 Here the front pan on the driver side has been installed and being finished up.  Notice the rot on the pan underneath the driver seat.  This section will be cut out and replaced.  I'll cut about 16" over from the frame and the whole "box" part of the pan will be replaced.

Cowl is in place, but front pans have yet to be welded in in this shot.  Gives you a better view of the whole process. The 2nd picture shows the transmission tunnel in place.  This was actually bolted to the new pans before welding them, to make sure everything lined up properly.  The tunnel is attached with speed nuts and bolts, just like HUDSON did it. 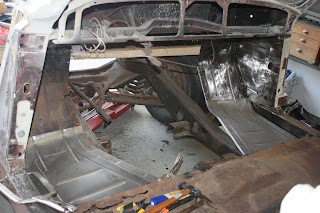 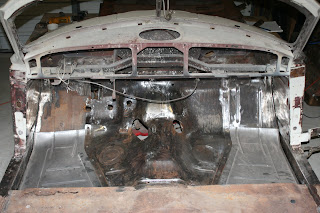 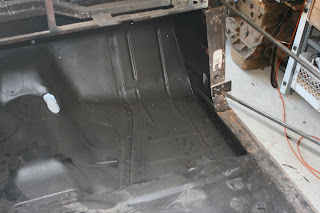 These two pics show the front floor pan area about 95% complete.  Just some minor finishing to do before she gets blasted.
Posted by Russell Chilton at 9:33 AM